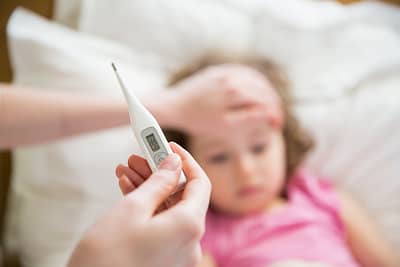 Despite a parent’s best efforts, most children will still get sick from time to time. Excluding the common cold, there are several frequent children’s health problems that you should know about. These conditions can necessitate a visit to your pediatrician. In illnesses where antibiotics are prescribed, neglecting to use them can result in a lengthier, and potentially more serious illness.

Strep throat, a contagious bacterial infection, is sometimes difficult to distinguish from a simple viral sore throat. The symptoms of strep throat generally include the sudden onset of fever, sore throat, red or white patches on the throat, loss of appetite, and difficulty swallowing, especially in the absence of runny nose and cough, which usually indicate that the illness is caused by a virus rather than strep. Strep throat usually occurs in elementary-school-aged children, and is rare below age 3 Strep throat should always be treated by a pediatrician, because untreated strep throat can cause complications such as rheumatic fever.

Pinkeye, also known as conjunctivitis, is another common children’s health condition. Pinkeye can have a bacterial cause, which will need a doctor’s treatment, or a viral cause. Furthermore, it could be the result of allergies or irritating substances. Pinkeye from bacterial infections can be treated with antibiotic eyedrops. Symptoms of bacterial conjunctivitis (pinkeye) include redness of the white part of the eye (the conjunctivae) and thick, sticky discharge from the eye.

The flu is one of the most common childhood illnesses, especially during the colder months of the year. Influenza is a very contagious infection of the respiratory system caused by a virus. In addition to typical cold symptoms, influenza infections can cause fever, vomiting, weakness, fatigue, loss of appetite, chills, dizziness, runny nose and general achiness. As the flu is viral in nature, antibiotics will not be effective. An antiviral flu medication such as Tamiflu (oseltamivir phosphate) can help lessen flu symptoms and duration, but it is not appropriate or needed for everyone with the flu. Tamiflu is generally used in “high-risk” patients, such as the very young, as well as children with other underlying health problems, such as asthma or diabetes, and particularly when the child has not been vaccinated against the flu. Tamiflu generally works best when started within the first 48 hours of symptoms.

Diligent parents may worry when their flu-vaccinated children come down with the flu, but it is important to realize a flu shot only protects against the season’s most common strains, not all strains of flu. Children and adults might contract the flu before receiving their annual flu shot or from a flu strain the vaccine did not address. Even if your child comes down with the flu despite receiving the flu vaccine, generally the illness will be less severe than if your child did not receive the vaccine at all.

Touchpoint Pediatrics is available to answer your questions about your children’s health concerns. To schedule an appointment with one of our pediatricians, don’t hesitate to contact us.